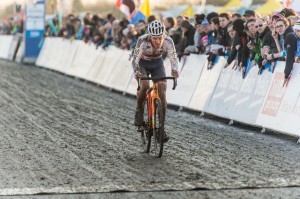 As huge cycling fans, Gener8 Finance are pleased to announce that we are sponsoring one of the country’s leading Cyclo-Cross riders, Ben Sumner for the 2015/16 season.

Cyclo-Cross is already extremely popular in Europe, as both a participation and spectator sport, and is rapidly gaining popularity in this country. It is very different to traditional road and track racing, and involves riding over a variety of terrains, including fields and tracks, with competitors having to dismount and carry their bikes over obstacles.

Oxfordshire-based Ben (pictured right), 21, is the reigning under 23 Trophy Series champion, a title he also won in 2014. In addition, he won his third consecutive bronze medal in the under-23 category at the British National Cyclo-Cross Championships in 2015.

Ben’s Under-23 category success was also enough to see him come 3rd in the National Trophy Elite Men’s Series – we are confident that he is heading for greatness, and at Gener8 we are proud to be supporting him all the way.

Ben rides for the Beeline Bicycles Cyclo-Cross team, which is owned by Beeline Bicycles, Oxford’s leading cycle retailer (www.beelinebicycles.co.uk). The Beeline team is a huge supporter of up-and-coming cyclists in the U.K. and has a stable of talented young riders.

The cycling season begins again in October, and will see Ben compete in the Round 1 of the National Trophy series in Southampton, on the 11th. His main goal this year is to focus on the National Trophy, and win the yellow jersey!

Pre-season training is going well, with Ben recently competing in the Eastern Cyclo-Cross League (www.easterncross.org.uk/race15-16-1.htm) at Basildon Sporting Village in Essex, which he won comfortably, beating the 2nd placed rider by a full 1 minute 20 seconds!

“For the first race back I was just testing my legs really. I’m going to be focusing on the National Trophy this season, and aiming for that yellow jersey. I don’t think that’s an unrealistic expectation.” (Ben Sumner)

Gener8 will be following Ben’s progress as he continues to compete across the UK and Europe, and we will be sharing his journey with you.